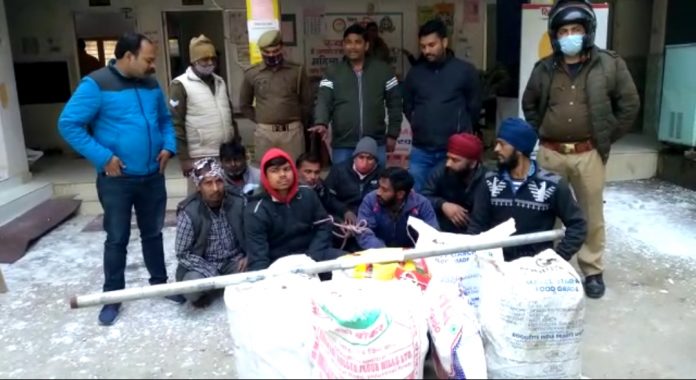 Moradabad:  Moradabad police has arrested eight people with the help of STF. These people were taking a tanker filled with extra neutral alcohol from Bihar to Punjab, they were being caught by the relevant condition and action is being taken against them.

A total of eight people have been arrested from Moradabad Agwanpur intersection area in joint raids of STF and Civil Line Police of Uttar Pradesh, according to the police, they were carrying 30 thousand liters of extra neutral alcohol in a tanker and transporting it from Bihar to Punjab.  When the raid was conducted on the basis of the information received by the STF, alcohol was being extracted from the tanker on the spot, which these people used to sell illegally in other places, the information on which this action had been taken.
According to SP City Amit Anand, these eight people have been caught extracting alcohol at the dhaba in Agwanpur, “they were about to use it somewhere else for adulteration, the police also recovered about 30 thousand liters of alcohol”.