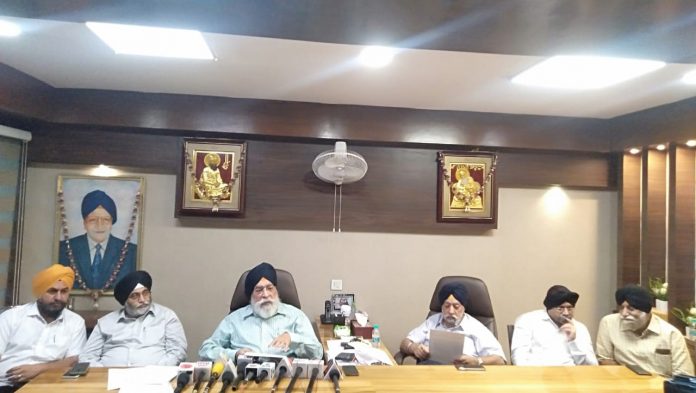 NEW DELHI – The SADD admonished the Badals for their another round of bogus promises to Delhi’s Sikh Sangat when they failed to fulfill any of their commitments in their past DSGMC manifestoes.

A day after the outgoing DSGMC president, MS Sirsa, came out with a list of completely unrealistic pledges in his bid to mislead the DSGMC voters at the behest of his political masters, SADD chief Paramjit Singh Sarna listed out the sins of omission and commission the incumbents have rather perpetrated since they took control of Delhi’s top Sikh religious administration in 2013.

In bullet points, the Panthak leader detailed the massive setbacks the DSGMC has already suffered under the Badals:

• Complete draining of more than Rs 120 crore from the gurdwara exchequer to personal coffers of the Badals in eight years
• Complete draining of another Rs 250 crore estimated to have been generated during the eight-year period
• Criminal cases against DSGMC presidents, Sirsa included, for fraud, forgery, golak loot
• Hiding Deloitte audit of gurdwara finances from the Sangat
• Complete collapse of DSGMC-affiliated GHP schools, Sikh colleges
• Mounting unpaid salary bills of GHPS, DSGMC staff
• Mounting dues to the UGC/central authorities for college affiliations
• Unaccounted shipping of donated critical-care equipment, oxygen concentrators from DSGMC stocks to Badal constituencies
• Accepting money from Amitabh Bachchan for health facilities, but not disclosing the source till the truth was revealed by the actor
• No audit/account of Rs 12 crore donated by Amitabh Bachchan
• No audit, no accounting of donations generated from bogus announcements of a Badal-led Nagar Kirtan from New Delhi to Sri Nankana Sahib in 2019. That Nagar Kirtan never took place but tons of cash and gold was generated in donations in its name
• No audit/accounting of donations generated in the name of pandemic sewa. At least Rs 40 crore is believed to have been siphoned off from pandemic charity
• Grave damage to Panthak Maryada, to Sikh Sidhant, to sanctity of Gurbani, to sanctity of Sikh history under the Badals
• Guru Sahiban paraded as idols in Nagar Kirtans, Karva Chauth celebrated at Sri Bangla Sahib, Guru Harkrishan Sahib sent to quarantine, Chaar Sahibzadey belittled as “baals”, or kids, cake-cutting proposed at Sri Rakab Ganj Sahib to celebrate Florence Nighingale’s birthday, vulgar dance and song routines green-lighted on the sacred compound of Sri Rakab Ganj Sahib, history linked to the Gurus’ martyrdom twisted on several occasions, Guru ka Langar wheeled out of the Pangat to political constituencies, sewa auctioned off on TV, calls for raising money without accountability on television

“The list of the Badals’ wrongdoing is endless. They first need to answer a number of questions from the Sangat about what they have done at and to the DSGMC during these past eight years,” Sarna told a news conference. “Their track record doesn’t start and end at Delhi. The Badals have also destroyed the highest institution of Sri Akal Takht through their rubber-stamp Jathedars. One of them issued a unilateral pardon to the Sauda Saadh, the other brushed the Badals’ golak loot in Delhi under the carpet. Worse, Giani Harpreet Singh just inflicted new damage to the office he holds by writing to the JK lieutenant governor to demand UP-type anti-conversion laws in Jammu and Kashmir. Not to mention, he addressed the LG as His Excellency.”

The SADD leader reminded the Badals that resources they siphon off from gurdwaras are not generated from taxes. “These resources come in the form of the Sangat’s Dasvandh. And you don’t blink an eyelid when you order their brazen loot. Your new bogus promises are another attempt to mislead the Sangat ahead of the DSGMC elections. But you are going to bite the dust as you stand badly exposed before Guru Panth,” Sarna told the the Badals.