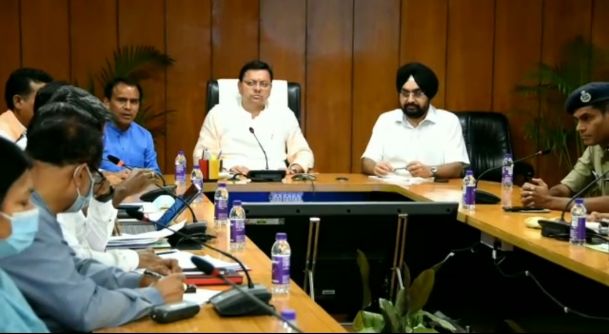 Passengers should not be troubled, take a good message from the state * In view of the heavy rain alert in the state, Chief Minister Pushkar Singh Dhami inquired about the situation in the state with all the district magistrates and senior officials of disaster management departments and agencies at the Secretariat. The Chief Minister took detailed information from the District Magistrates about their preparations, rain situation etc. The Chief Minister directed to observe a holiday on October 18 in all the schools of the state. Holiday tax has also been given in many districts. The districts where it has not been done should also declare Monday a holiday in schools as a precaution. The Chief Minister said that at present a large number of tourists and pilgrims are visiting the state. If necessary, arrangements for their stay and food should be ensured by keeping them in safe places. Don’t be careless about it. Tourists and pilgrims should carry a good message from here. The Chief Minister said that the control rooms at the state, district and tehsil levels should be operational 24 hours. Reports should be sent from the districts every hour for these two days. In case of any incident, it should be reported immediately. Response time should be minimum. The Chief Minister said that the water level of rivers should be continuously monitored. Work in coordination with ITBP, CWC, BRO, SDRF, Revenue, Police etc. Keep complete information about the trekkers and keep in touch with them. Special attention should be given to the Landslide Zone. Arrangements should be made to open immediately when the road is closed. The Chief Minister said that it should be ensured that people are not trapped anywhere due to landslides etc. They should stay in safe places. Disaster rescue and relief equipment should be in good condition. The Chief Minister said that in view of the heavy rain alert, utmost care has to be taken. Passengers and tourists should also be appealed to be careful, but there is no need for any kind of panic. The District Magistrate, SSP should themselves monitor. In the meeting, complete information was taken from all the district magistrates. It was told that the situation is normal everywhere. As a precautionary measure, Chardham pilgrims have been stopped safely. There is adequate arrangement for lodging and food.