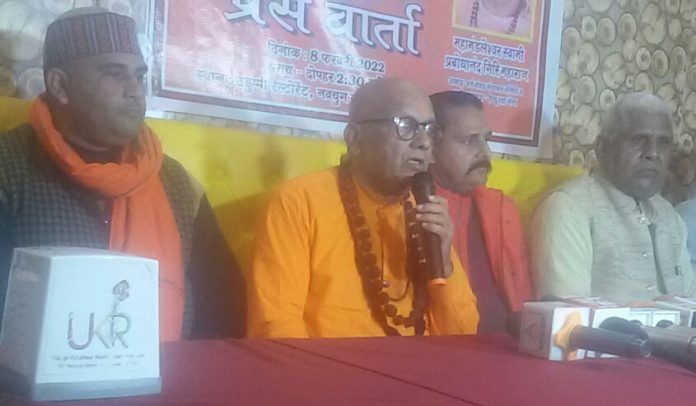 Ghaziabad: Mahamandleshwar Swami Prabodhanand Giri (Sri Panch Dadnam Juna Akhara, Haridwar and the national president of Hindu Raksha Dal said here, Yogi Adityanath is only sant politician who fights for national and Sanatan Dharm. It is essential Yogi’s government in Uttar Pradesh and he might be again as CM of U.P. for Nationalism and Hindutva.
He claimed that all the workers of Hindu Raksha Dal will support to Yogi in assembly election-2022 as Yogi is need of UP for development and progressof state. He addressed a press conference in Ghaziabad to express his feelings and declaration to support Yogi by Hindu Raksha Dal.

Swami Prabodhanand Giri Ji Maharaj said Yogi is the best CM in all the states of India and is known as only Sanatan Hindu Dharam/ Indian Culture lover politician in the world. His ruling styleas CM, has been considering as fearless and bold CM. He never compromises with public interest and justice. The UP has done remarkable progress during last five years and to continue it, Yogi must be again CM of UP.
When he was asked about so called hate speech in Dharam Sansad in Haridwar, he said, there was not any hate speech. Some media persons presented it in wrong way with their ill will to Hindu.Whatever Narsinghanand and Jitendra Narayan Tyagi said, nothing is hate speech. Both of them talked only about Sanatan Dharam and protesters of Hindutva. Every citizen of country has right to express his religious feelings publically. Sawami Prabodhanand Giri allegedly said, the Dhami Government of Uttarakhand had taken action against
both these true Hindu saints under pressure of Jihadi and it is absolutely illegal. We will fight in courts against this injustice.
Praveen Chaudhary, the UP vice president of Raksha Hindu Dal, UP convenor Naveen Tyagi, Distt President of Ghaziabad Neeraj Chaudhary, Jai Kamal Agrawal were also in press conference.