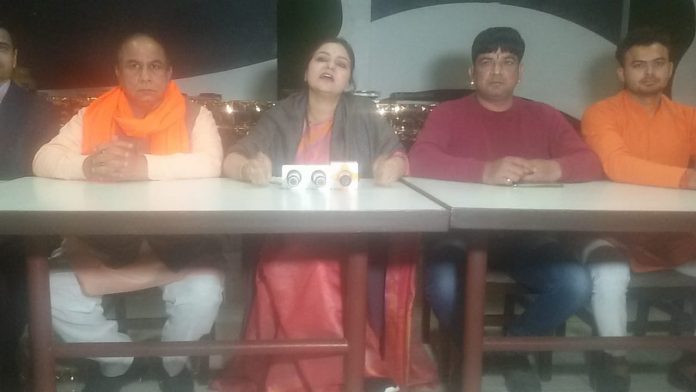 Ghaziabad: Dr. Udita Tyagi, the Mrs. India Worldwide 2011, general secretary of Yati Narsinhanand Sarswati Foundation and Akhil Bharatiya Brahmrishi Mahasangh, declared to start Hindu Jagran Padyatra to support Narsinghanand Giri and Jitendra Narayan Tyagi (Former name Waseem Rizvi) who are behind the bars. Both of them are named accused under minor sections as both of them are allegedly so called hate speech in Dharam Sansad organized in Haridwar some months ago. She was addressing media persons here on Tuesday.
Dr. Udita Tyagi said the Hindu Jagran Padyatra will be started from the office of District Magistrate Ghaziabad on February 12 and it will get end on February 20 at the office of Chief Minister of Uttarakhand located in Dehradun. The Padyatra will march via Meerut, Mujaffarnagar, Rurkee, Saharanpur Haridwar.
Dr. Udita allegedly said, the Government of Uttarakhand filed case against Narsinghanand Giri and Jitendra Narayan Tyagi as they raise their voice against Islamic Jihadi and work to strengthen Sanatan Dharm and Hindutva. She said, she will start Padyatra all alone but many of volunteers and followers of Narsinghanand Giri can join her Hindu Jagran Padyatra. All of them who come with her in Padyatra, are heartily welcomed, claimed her.
Sunil Tyagi, national president of Brahmrishi Mahasangh, Rajeev Tyagi, Mohit Bajrangi, Vivek Nagar were presented in her press conference.