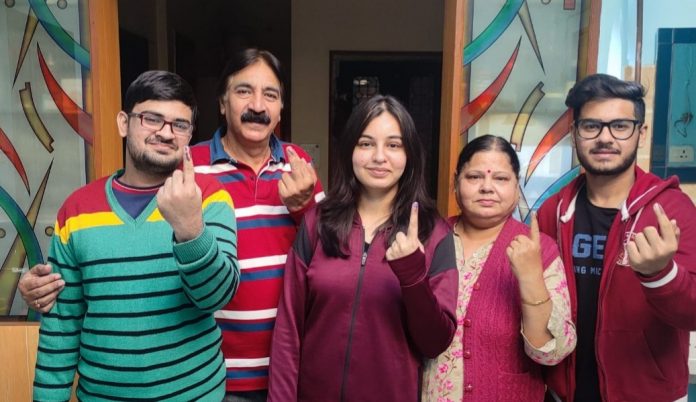 Ghaziabad/Lucknow: The first phase voting in 11 districts of Western UP for 58 Assembly seats is claimed peacefully with the minor hot talks at some places. Over all voting in first phase is claimed satisfactory, fair and peacefully by concern authorities. It was first phase in UP on February 10. The maximum voting was done in Shamli and lowest in Sahibabad(Ghaziabad).
The election commission has offically reported total average voting 57.79% till 5.00 pm in all eleven districts Agra, Aligadh, Baghpat, Bulandshahr, Gautambudh Nagar (Noida), Ghaziabad, Hapur, Mathura, Meerut, Muzzafarnagar and Shamli. The second phase voting in U.P. is scheduled on February 14.

There was hot talked between the workers of BJP and Congress in Rajnagar area in Ghaziabad. The incident was taken place when the MP of Ghaziabad and central minister General V.K. Singh was talking to media persons after his voting. The supporters of Congress candidate protested central minister VK Singh to talk media out side the voting booth. The workers of BJP supported VK Singh and there was began hot talk however the issue was settled immediately by election duty officers and force.

On the other hand, One of the Electronic Voting Machine (EVM) was reported out of working in Islamia Inter College, Muzzafarnagar and there was held voting for an hour. The same matter was reported in Composite School, Pappu Colony under Sahibabad Assembly seat of Ghaziabad district. After an hour the EVMs were replaced and it was started voting in running position.
In Loni Assembly seat, a female voters allegedly said misvoting in EVM. The district election Officer RK Singh took action receiving voter’s complaint
The female voter was offered challenge vote, but she denied to use it. Later the allegations were found false, said presiding officer.