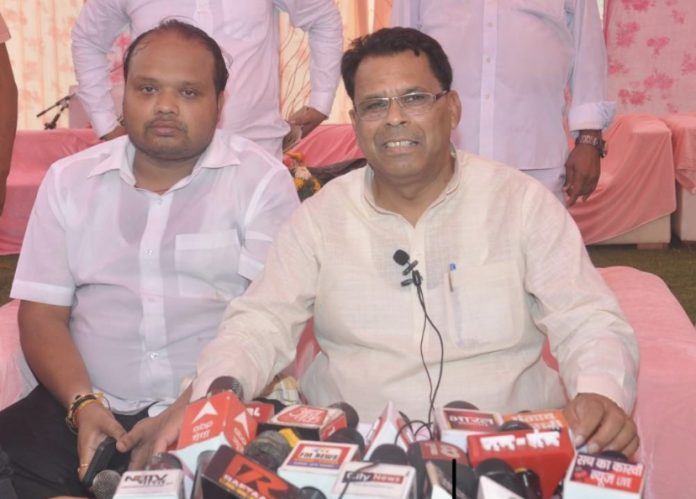 Ghaziabad. The Minister of State Backward Classes Welfare (Independent Charge) Narendra Kashyap said that BJP is the only party which fulfills its promises. In the Yogi government, the benefit of all public welfare schemes is being given to the last person till the last mile. Minister of State, Kashyap expressed his gratitude to Prime Minister Narendra Modi, Chief Minister Yogi, BJP President JP Nadda, Home Minister Amit Shah, BJP State President Swatantra Dev Singh, Deputy Chief Minister Keshav Prasad Maurya and Brijesh Pathak for giving him a place in the cabinet of the UP government.

The Minister of State for Backward Classes, Narendra Kashyap was talking to reporters at his residence on Sunday here. He told about the road map of his hundred days’ work that the construction work of the hostels being built by the Backward Classes Department in Azamgarh, Gorakhpur and Ambedkar Nagar is almost completef and the officers of the committee constituted by the District Magistrate have done site inspection. The hostel of Azamgarh has been transferred to the educational institution. The construction work of hostel in Gorakhpur district is in progress. The proposal for the construction of hostels is being sent to the Government of India for approval so that all the operated departmental schemes can be connected with the UMANG app.

Regarding the Divyang Empowerment Scheme, the Minister of State said that smart classes have been arranged in 16 special schools. The work order has been issued on 30 June 2022 after selecting the agency to develop the portal. Management system software is being prepared and work is in process to acquire domain and space, which has been started on 15th June 2022.

He further said, in the first phase, the targeted 9 Bachpan Day Care Centers which are at Lucknow, Prayagraj, Gautam Budh Nagar, Varanasi, Gorakhpur, Agra, Saharanpur, Bareilly and Chitrakoot have all got ISO 9001 2015 certification. Built in the University campus. Artificial Limbs and Rehabilitation Centers and Specialized Stadiums have been started.

He said that Chief Minister Yogi has announced that 100 Divyang people will be provided motorized tricycles in each Lok Sabha constituency. It is proposed to increase the rate of grant from Rs.1000 per month to Rs.15,100/- per month under the PWD pension scheme from Rs.10,000 to Rs.15000 per beneficiary.

Along with this, the operation of newly integrated schools Prayagraj, Kannauj and Auraiya, construction of hostel building for disabled girls in Dr. Shakuntala Mishra National Rehabilitation University, starting of paramedical courses etc. are included. BJP leader Saurabh Jaiswal was also present along with the Minister of State in the press conference.