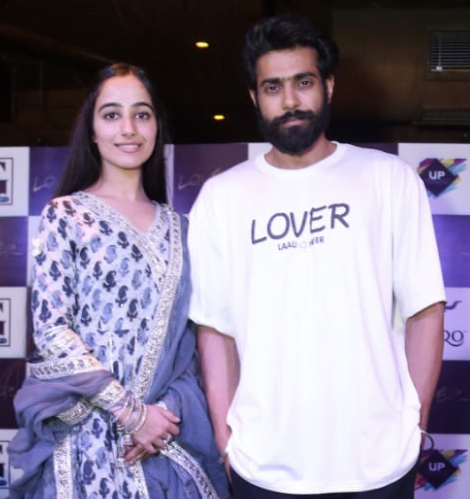 Delhi :Introducing the biggest romantic hit of the year, Geet MP3 is fully prepared to hit the silver screen with their upcoming presentation, Lover on 1st July 2022. Starring in this unique film, the actors Guri and Ronak Joshi have made the audience enthralled with their chemistry as mad-in-love Lovers. The film is thoughtfully produced by KV Dhillon, and the story has been directed by Dilsher Singh and Khushpal Singh with great intensity. The story of the film has been written by Taj.

The film has delivered absolute dreamy tracks and features melodious music that depicts the sadness and feelings of two lovers. The greatest attraction of the film is that the tracks in the film have been sung by very renowned singers including Atif Aslam, Rahat Fateh Ali Khan, Nooran Sisters, Sachet Tandon, Asees Kaur, and Jass Manak. Babbu, Jass Manak, and Love Lohka wrote the lyrics, to which Sharry Nexus, Sniper, and Rajat Nagpal gave the music.

The film is a love story with a tempestuous ending to the romance between Lali and Heer. Lali appears to be Heer’s true love, wanting to be at her side forever. But fate has a tragic break in Lali and Heer’s narrative. Will their love story come to a shocking conclusion? On July 1, 2022, audiences will see the love story of two lovers separated by destiny in theatres.

Sharing his excitement, Producer KV Dhillon says, “The depth of the characters’ feelings is the basis of the plot that makes this story so exceptional, and bringing this up with such precision was our goal. The actors who felt the agony and nerve of these people and acted them so brilliantly, however, had a larger role. We are confident that the audience will connect with the film.”

Celebrating the appreciation, the director of the film, Dilsher Singh and Khushpal Singh said, “we cheer to all the appreciation and love that the film has amassed till now and we are certain that there is more to come once the film is released.”

Being the part of the greatest film of teh year, actor Guri said, “the immense amount of love been given to my character and my new appearance is has been unimaginable and I eagerly wait for the reaction by the fans once the movie is released.”