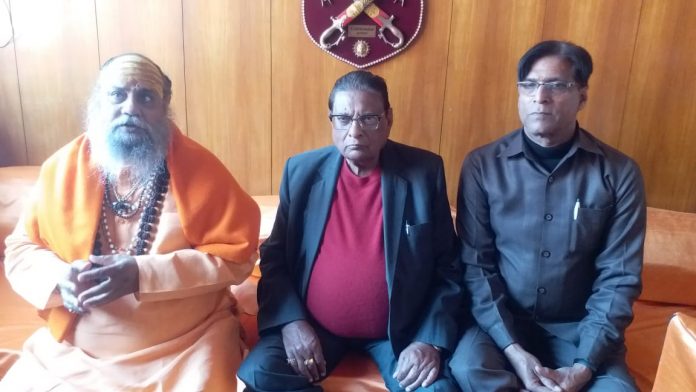 It is estimated that about 6 lakh devotees on Shivratri that falls on Friday, 21 February. And keeping the same in mind, the temple administration and the district administration have made their own arrangements, on behalf of the Municipal Corporation, Ganga water has been arranged in the temple for the devotees to anoint Baba Dudheshwar and Police Party for security arrangements by the police administration.

Rapid Action Force, Civil Defense Warden will live in the entire fair complex like every year. In which about 32 CCTV cameras will monitor the entire temple complex and the silent area of ​​the fair area. Jalabhishek will start from 12:00 pm on Thursday 20 February till the night of Friday 21 February and the fast of Mahashivaratri will be on Friday, this information was given by the Shri mahant Narayan Giri Ji Maharaj, the spokesperson of the temple’s.

Chairman of the Doodeshwar Temple Development Committee and famous social worker Shri Dharampal Garg Ji told in the press conference that this time the festival is likely to anoint a large number of devotees from Delhi NCR and nearby areas, for which about 200 workers of the temple committee And the Warden and SPO of the Civil Defense Organization have also been deployed to help and facilitate the devotees. All these workers will be connected to each other through wireless sets and flowers have been requisitioned from Kolkata, Delhi, Mathura and Chennai etc. to decorate and give a grand look to the temple. Around 60 to 70 artisans work to redesign the temple tent by Dream Tent House from Greater Noida with various colorful lights to appear as a flower garden.

On Friday morning and before the evening aarti, the grand decoration of Baba Dudheshwar will be done as Mahakal, in which 108 types of dishes will be offered as well. It will be a center of attraction which has been done by Shri Dudheshwar Shringar Seva Samiti, in which Lord Shiva is riding Nandi (bull) in the house of mother Gaura Will the mother Gaura put jayamala in Glen Lord Shiva shall see as Pindi God Dudheshwar program will then farewell. All of you will also join the Shiva devotee procession and reach the temple and enjoy Shiva marriage. After that, the temple monk Shrimanath Narayan Giriji Maharaj and the chairman of the temple committee Shri Dharmapal Garg and Ginni Devi Garg, Anuj Garg, Prerna Garg etc. will anoint Lord Bholenath with the chanting by the scholar Pandit of Ved Vidyapeeth! At the same time, after marriage, mother Parvati will be bid farewell to the palanquin, on this occasion, for the devotees at the Main Gate of the temple, Radhe Karan Art Group and Party will continuously sing hymns to Lord Shiva of Delhi. Colorful lights and colorful fabrics in the temple complex will also enhance the beauty and grandeur of the temple. All the arrangements of the temple will be made on the occasion of Mahashivaratri under the leadership of Dudheshwar Shringar Seva Samiti Chairman Mr. Vijay Mittal, Anuj Garg, Dheeraj Kumar, Mr. S R Suthar Media Incharge, Acharya Laxmikant, Man Mohan Goyal, Sanjay Singh, Sanjeev Verma, Vijay Singhal etc. were present on the occasion.