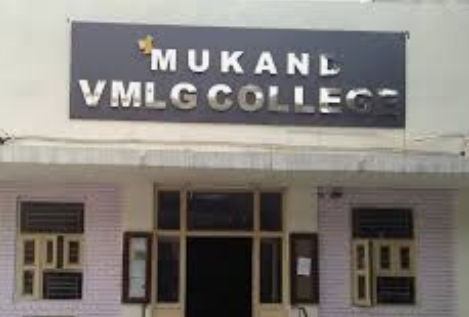 Ghaziabad : The issue of illegally relieving Dr Amita Solanki from  officiating Principal of VMLG College, Ghaziabad, without due resolution passed by college management committee and after illegally issuing order by college management committee secretary; Ashok Kumar and or by giving her due one month notice as per rule of UP govt. and CCS Meerut University has now been under active consideration of Chancellor and UP Governer; Mrs Anandiben Patel.

The governer house has asked a report in this regard from Vice Chancellor of CCS Meerut University and subsequently the registrar has summoned Ashok Kumar, Secretary VMLG Management Committee, following illegal reliving of Dr Amita Solanki and again appointing Dr Indrani Verma; an accused in a criminal case of murder and criminal conspiracy of a BCA 3rd year student Pushpanjl Choudhary of this VMLG colkege’s hostel in 2017.

The Secretary; Ashok Kumar by name, has been summoned by the registrar of CCS Meerut University and asked to appear before Vice Chancellor  tomorrow at 3:30 pm, through a letter  of which a copy of the same is in the possession of “A News of India”. But reliable sources in the college are telling that Ashok Kumar is a “very clever’ and “shrewed” chap will never appear in any such proceedings in past and is still likely to keep himself away from the hearing and could send some one to save his skin.

It is likely that Ashok Kumar may send some one else in the proceeding to save his face from humiliation.When contacted by this correspondent, his mobile was either switched off or out of network area, as informed the mobile network.So he could not be contacted for his confirmation. But this correspondent is having the letter issued by Meerut University.

After the murder of one of VMLG College student; Pushpanjali Choudhary who was murdered in the hostel of VMLG College campus and her father met every one right from pillar to post to get the FIR registered in Sohani Gate police station but his all effort gone futile, due to high handedness of all culprits under the influence of college functionaries, who were real accused in the case.

Finally court had taken it’s cognizance and an FIR was lodged on the direction of court and police finally registered FIR only on 1st November 2019, after almost 2 years of incident, due to “palms of the police were greased” by the accused Dr Indrani and other 3 accused; another employee of this college and 2 other room mates of deceased, who were part of writing suicide note, as per FIR registered in Sihani Gate police station vide case no. 1645/2019 although the murder took place on 7th September 2017..

It is being said in the FIR that under the pressure of principal and college functionaries one of the roommates of deceased Pushpanjli,  Swati Pawar was compelled to write the suicide note in the name of Pushpanjli. However, Babu Lal Choudhary had claimed that the suicide note was not matching with the hand writing of his daughter Pushpanjali and was matching with her room mate Swati Pawar, who was also made an accused in the case.

Even the chargesheet in the case is being deliberately delaying on the basis of non availability of post mortem report by the inquiry officer; Gaurav Kumar Singh, the chouky Incharge, Dayanand Nagar. However, it is being said that the inquiry officer has hand in globes and has very close association with the managment of the colkege as well as all accuses in the above said  criminal case that too of a cognizance offence of murder and criminal conspiracy like cognizance offence.

It is very strange that Dr Indrani was forced to resign from the post of officiating principal of VMLG College, after FIR was lodged against her under section 302 & 120B vide FIR no. 1645/2019 in November 19 and the management committee of VMLG College in its December’s meeting decided to remove Dr Indrani from officiating principal and had asked to tender her resignation and als