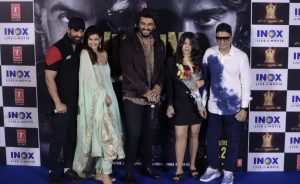 Recently, Actors- Arjun Kapoor, John Abraham and Disha Patani arrived in Delhi to promote their upcoming movie Ek Villain Returns. Along with the starcast, Director Mohit Suri, Producer Bhushan Kumar and Ekta Kapoor were also present at the event. The event was held at INOX, Nehru Place. The movie is all set to release on 29 July 2022.

Arjun Shared, ” It has been one of the most challenging roles I have played till now. My character in the movie is an extreme version of grey character, he wants to be hated by the people. I really enjoyed doing the role.”

John Said, ” I have played many grey shades in my previous movies. For me normal is boring. When I saw the movie I really enjoyed it even though I was a part of it. All 4 ( Tara, Arjun, Disha And himself) of us have played a different shade and with so many twist and turns