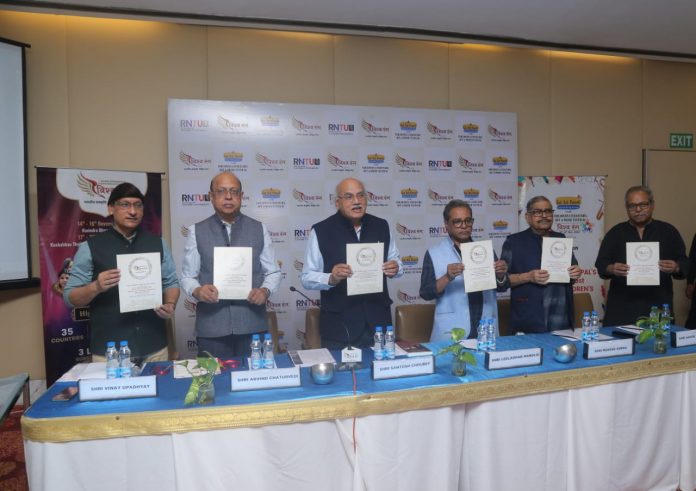 Announcing the 4th Edition of ‘Vishwarang 2022’ the biggest Indian literature, culture, art, music and cinema festival
• Vishwarang will begin with the ‘Aarambh’ ceremony on 11th November 2022 from Sahitya Akademi Hall, New Delhi.
• Press conference in Delhi to announce the new edition of the festival with impactful artists, performances and celebration of traditional Indian art forms and culture with participation from over 50 countries ~
• Vishwarang will be held from 14th -20th November’2022 with its creative grandeur and dignity in Bhopal, the capital city in the heart of India.

New Delhi, 10th Nov 2022: Drenched in the diverse colours of literature, culture, and arts, Vishwarang presents its fourth edition to spread the message of peace and unity across the world. The arts and cultural festival organised by Rabindranath Tagore University will be held from 14th -20th November’2022 with its creative grandeur and dignity in Bhopal, the capital city in the heart of India.
This information was shared by Shri. Santosh Choubey, Director of Vishwarang, Chairman of AISECT Group and Chancellor of Rabindranath Tagore University, Bhopal. He was speaking in a press conference organised on Thursday at The Park Hotel, Connaught Place, New Delhi on Vishwarang 2022. In this press conference, Shri Leeladhar Mandloi, Co-Director of Vishwarang, Shri Mukesh Verma, Director Vanmali Srijan Peeth, Shri Ashok Bhowmick, Renowned Artist, and Shri Vinay Upadhyay, Director of Tagore Vishwa Kala Kendra were also present.
During the press conference, schedules of Vishwarang and Get Set Parent’s Children’s Literature and Arts Festival were also released. Guests at the press conference emphasised what makes Vishwarang the world’s unique literary festival organized by any private university. In the 7 days of festival, the artists and eminent personalities from across the globe will be joining hands to enlighten and appreciate our country’s culture, art and literature.
Speaking of the 4th edition, Shri Santosh Choubey said “Vishwarang celebrates the true spirit of poetry, art, music, culture &; literature to a global audience. With the 4th edition of Vishwarang, we aim to bring more people together, with the ambition to increase and grow cultural awareness and the legacy of the rich heritage of India and celebrate it across the world”. While addressing the press, Shri Santosh Choubey concluded that Vishwarang will begin with the ‘Aarambh’ ceremony on 11th November 2022 from Sahitya Akademi Hall, New Delhi.
World Poetry Presentation and Indian Poetry Seminar will be organized there. Vishwarang Schedule, Viswarang Trailer, Pustak Yatra film show, Vishwarang Painting Monograph will also be released on the occasion. Vishwarang has added that over 50 countries from across the world are taking inspiration from the goal of cultural harmony. The artistry and beauty of the Indian languages and culture have been heard and resonate all over the world, and Vishwarang 2022 focuses on the revival of new-generation cultural trends and creativity.

The last edition of Vishwarang had a strong presence and participation from around 42 million viewers online, more than 4 lakh registered members across 50+ countries and tie-ups with globally renowned artists. It is an event that celebrates the heritage of arts and culture and provides a global stage for fresh and upcoming talent. The goal of Vishwarang is to honour aspiring artists and niche category art forms, enabling them a global stage and audience with a request to release in your prestigious News Media.
Key highlights of Vishwarang 2022 – This year, the festival will begin with an Artists Yatra for World Peace & Harmony, followed by a National Painting exhibition. There will be Art Exhibition, Film Screening and discussion sessions on Tribal & Folk Culture. The inauguration ceremony will be graced by performances by acclaimed artists like Singer Papon, Shilpa Rao, Maithili Thakur & Kaushiki Chakravarty. Celebrities like Filmmaker Vishal Bhardwaj, Scientist K. Kasturirangan, Shark Tank fame Ashneer Grover, and actor Biswapati Sarkar will be part of sessions & discussions.
From November 14th to November 16th, a grand event of Vishwarang ‘Kala Mahotsav’ will be held at Rabindranath Tagore University and Rabindra Bhawan, Bhopal. The art festival will begin with the classical singing of famous singer Kaushiki Chakraborty. The presentation of Ramayana by Shri Ram Bhartiya Kala Kendra will be held in the amphitheatre of Rabindra Bhavan. The play ‘Bandish’ directed by well‐known theatrical director Poorva Naresh will be staged. There will be presentations of Rabindra Sangeet by Shubbrata Sen, Vrindgaan by Sur Parag Jabalpur. In the Purva Rang, there will be Geeta Parag’s musical performance on Kabir and Dhannulal Sinha of Naya theatres will present Rang Sangeet.
The main events of the Tagore International Literature and Arts Festival will be held from November 17th to 20th at Kushabhau Thackeray Convention Centre, (Minto Hall), Bhopal. The main function of Vishwarang will be inaugurated on the 17th of November evening by the Hon’ble Shri Mangubhai Patel, Governor of Madhya Pradesh, Hon’ble Shri Subhash Sarkar, Minister of State (Education) Government of India and Ms. Usha Thakur, Hon’ble Minister, Culture and Tourism Department, Govt. of MP. A Sadbhavna rally will be organized from Ravindra bhavan to Khushabhau Thakre Hall apart from the painting competition in Ravindra Bhavan. Vishwarang festival is being organized in association with more than 50 countries apart from India.

The festival will host various discussions on Indian culture, and classical art, entailing engaging discussions on topics such as the Impact of Indian Culture on the Global Scene, Indian Knowledge System and National Education Policy, World Poetry, Writings of Indian Women Writers, Hindi and Urdu poetry, Art of Painting and illustration, meet the author and Mushaira. It is noteworthy that the Vishwarang festival has emerged as a platform from Central India that is now gaining fame in other countries.

Various authors and literature will play a pivotal role in the discussions, including diaspora literature, women’s writings and the role of regional language literature. The 3-day festival will feature prominent artists and popular faces in art, cinema, music and literature.
Keeping in mind the importance of tribal community and their culture, a special festival of tribal literature and art festival is being organized. This festival under the banner of Vishwarang will glorify the tribal culture of India. In this festival, programmes related to tribal art, painting, and literature will be organized between 18th to 20th Nov’22.