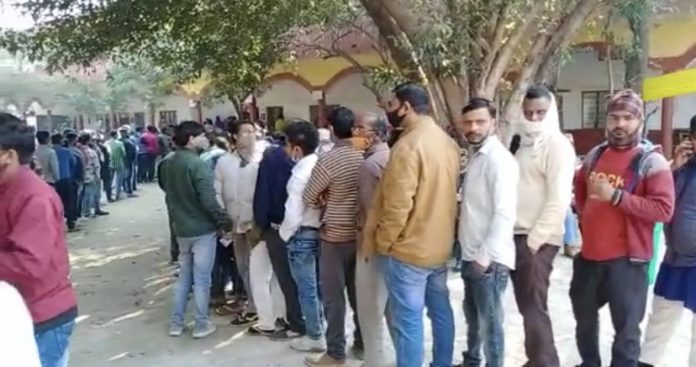 Moradabad: Voting is also being held in Moradabad district in the second phase of the assembly elections today.  Voters are reaching 2673 polling booths of the district since morning to exercise their franchise.  People have lined up at polling stations.  In the midst of the bitter winter, people are reaching out to the polling station to cast their vote after thinking about the first voting and then the refreshments.  If we talk about the assembly of Moradabad district, then there are 6 assemblies here.  Out of which four seats are occupied by the SP and two seats by the BJP.  This time too, the main contest is between the SP and the BJP in all the seats of the district.  If we talk about the voters of the district, then the total number of voters in Moradabad is 24 lakh 19 thousand 83 voters.  Out of which the number of women is 12 lakh 86 thousand 166.  This time there are 31 thousand young voters in voting who will vote for the first time.  There is a lot of enthusiasm among the people for voting.  Voters say that this time they will vote on the basis of development, education, health and safety.  This time more than 100 model booths have been made for the voters.  Which have been decorated through colorful balloons, selfie points, signature points, etc.  Not only this, special facilities are being made available for the differently-abled and old people.  Also, special arrangements have been made for security at all the booths.  People are fearlessly exercising their franchise for a strong democracy.  DM SSP is also keeping a close watch while traveling continuously.